It’s ridiculously warm in York this weekend. I thought, being in northern England, I’d be wearing all of my clothes layered atop another due to the coldness, but I was absolutely incorrect about that. Around 18 Celsius, maybe warmer, and even some sunshine!

Here I am in the sunshine one the wall that runs around York: 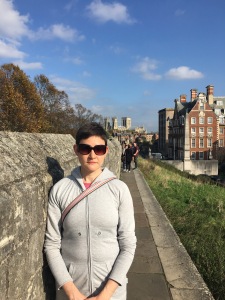 Today Susan and I walked along the wall and checked out a couple of museums. One was called The Henry VII Experience. The other was Jorvik Viking Centre, about a viking settlement in York. We got to ride around a viking village in a trolly! And the a guy showed us viking combs made out of antler, and bits of jewelry made of amber, and an ice skate made of cow bone. The highlight, however was getting to see the biggest fossilized poo in the world.

We’ve also spent some time here poking around the shopping area and the shambles market, because they’re easy to walk around in. We also walked along the wall, which led to a river, which we walked along until we got to a bridge, from which I took this picture: 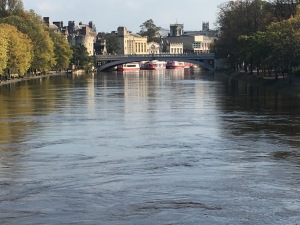