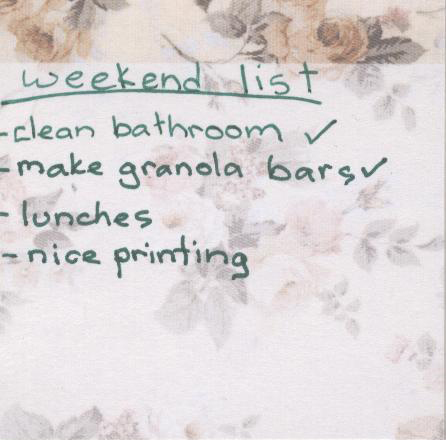 As you can see, I am yet to make my lunches for the week.  Rather, I have yet to finish making them, as I already have chicken sandwiches in the fridge and freezer, and a pot of rice cooling for salad.  “Nice printing,” I now realize, should also have a tick.  Please also note my pretty post-its.

I wore the stupidest pants at dance tonight.  They are meant to be yoga pants but they are cheep and don’t breath and are too loose so I have to tie the string around my waist so they are tight, but in an annoying way!  And if I don’t tie the string they fall off.  When the string around my waist isn’t bothering me, I’m grossed out by the sweat forming in a layer on my legs and being slippery because the fabric of the pants doesn’t soak any of it in.  Ew and ew.

Other than that, my favorite step of the evening was an arabesque with the arms hanging straight down in front.  It looks pretty when the teacher does it, and I hope it looks pretty on me.  (There were people in front of me so I couldn’t see in the mirror, and besides, I was concentrating too hard to look, and besides, *we’re supposed to be looking down* at that point.)

And that’s all I want to talk about today.

Speaking of the inside of my mouth, I’ve made another dental appointment for whatever I need done next. I don’t know what the procedure is named eveb though the dental receptionist said it a few times. Pre-fixing the teeth with cavities before they disintigrate. That will take place in April, which is fast approaching.

I’ve totally brought out my spring jackets to wear. It’s almost warm enough too. It wasn’t warm enough when I left for lunch, but coming back it was. I’ll bring out my spring clothes soon, maybe this weekend, but I’m still in the mood for my winter sweaters.

I’m listening to The End, the radio station, via internet. I haven’t listened to The End for many years, since 1998 maybe? Before l left home the first time. The signal didn’t reach my radio in Victoria so I had to listen to sub-standard Victoria radio. It’s probably been on the internet for forever now, but I’ve been into other things. Mostly television is what I’ve been into. And school, I guess. Hm. I just remembered I listened to them when I lived in Vancouver, also via internet. But they only seemed to play Postal Service. I liked it better when I was a teenager and reception was fuzzy on my radio coming all the way from Seattle.

My first awareness of Nine Inch Nails was a t-shirt worn by a guy in my art class. When I saw the band name (having never heard of them before) the first thing that came to mind was how the Chinese emperors grew their fingernails really long as a status symbol—they couldn’t use their hands for anything but that was ok because they had many servants to do everything for them. Yeah? Nine-inch fingernails? Sure.

The more books I read, the more I am unfit for human interaction, it seems. I actually used the phrase “I’ve been tasked” in normal conversation just a few moments ago. In my defense, I’m really tired today. Also in my defense, I not only read a lot, but I also watch a lot of British television/movies. Yesterday morning I made pancakes with a British accent. For example.

My mum will no doubt sum it up thusly: you’re just weird. That reminds me: I have to do my taxes.

I have the song “Inside Out” by Eve 6 in my head. This is the first song that played this morning after the news on the radio that woke me up at 6:28. I was annoyed to hear it, as it is an annoying song, and I am annoyed that it is in my head right now, and that I know all the words. I can’t say I hate the band Eve 6, however, as they were named after a character in an episode of the X-Files. I didn’t have to look at Wikipedia to tell you that, but if you don’t believe me, it’s all there for you to see.

Naomi invited me to move to Burnaby with her in 2 years to pursue school (her – SFU, me – TBD). Both Naomi and I are fond of making such plans, but they don’t usually coincide.

Tonight I can hear the tv from Someone Else’s Apartment.  This doesn’t usually happen.  Usually this only happens on Monday nights when there is a new “CSI: Miami” on because my neighbors watch it really loud.  I don’t mind– I used to be watching it too.  I don’t mind now that I don’t watch it as it seems to be the only thing they ever watch.

I caught a cold today.  Work gave it to me, I think.  Stupid cold.  I came home and sucked back on my asthma inhaler to try and prevent that whole debacle.  The asthma debacle, I mean.  Also an indication that I am sick:  I had tea with caffeine in it to try and stay awake at work, and then had a nap when I got home.  Caffeine and sleep aren’t normally compatable in my body.  Although I do seem to be pretty awake and keen to go now, and it’s pretty late.

For some reason I’m not computing words when they are written vertical.  Or numbers either.  I was just now sure that my music playlist was out of order, listing “1,2,3” but that’s a pretty routine sequence, wouldn’t you say.  Another example, in letters, is the word “church” that is written on a building near my work in great, big, letters.  I looked up at this the other day and my brain thought it was a loopy, decorative maze or something.  A second later I could see the letters again, but it was wacky not seeing them for a second.  (P.S. The word “church” is on an actual church, if you were wondering).

Also today I got a funny look for describing the big painting on the side of a building (another building, not the church) as a “mural”.  But that’s what paintings are called when they’re huge and on the sides of buildings, right?  I am obviously pretentious, not just aware of the correct words for things.

Happy Holidays, Everyone.  Following is my Christmas letter for the year for you to enjoy (if you can bear the patience of downloading it– it’s a PDF)

Amusing anecdote about Lindsie # 1: I occasionally am baffled by the element guides on my stove. As in, I look at them and can’t tell which knob is going to turn on a particular element. I usually take the few seconds needed to decipher whether I am about to turn on the front or back element, but once or twice I have put on the wrong one, resulting in a sad pot of non-boiled water and me having to wait longer for my pasta.

Amusing acecdote about Lindsie # 2: My mum makes good pickles. I usually keep these in good stock, but I have lately run out and needed to go buy some store-bought pickles for my hamburgers. I feel a little guilty when I do this, and also a little annoyed at having to pay for pickles. Added to this is the fact that I don’t entirely trust store-bought pickles. Not about the taste, which is fine if not as good as my mum’s, or the cost or anything. They just seem suspicious and smug to me. Also, at the store they have the jars labled “GARLIC” and “NO GARLIC” adding to my stress since I didn’t know that garlic was even an issue when it comes to pickles. Also, why would they say “NO GARLIC” if there is no garlic? Why not just leave that label off? Vexing. No peanuts, maybe, no dairy would be cool. “THESE CRACKERS HAVE NO DAIRY IN THEM WHATSOEVER.” Yes.